I’ve been playing Overwatch for multiple years at this point ever since the closed beta.  Over the past year my love for the game has diminished to the point where I don’t really enjoy playing it.  Now when I play Overwatch it is to play my seven weekly competitive games so I can maintain my rank for the game, which I don’t even always do anymore.  Overwatch for me used to be a really fun game that I could always play and enjoy now now the game feels watered down and isn’t close to being as fun for me and I want to find out why so I think I should start at the beginning.

How my Overwatch journey began was one of my friends at the time had a beta account and he let me play on it because I saw game play of the it and wanted to try it out myself.  So till the full release I would share it with him. In the beta I came to love the game and would play every second when my friend wasn’t online and I had free time. When the game officially came out I really wanted to get it but I wasn’t able to so I would move on a different friends account, I would play on their only for a little while till I got my own account.

When I finally did get my own account about a year after the game officially released I jumped straight into competitive with my friend.  That was a bad decision because at the time my friend was in the upper 5% of players so everyone there was way better than anything I had experienced.  Even though I wasn’t absolutely terrible it was my first time playing in a more competitive atmosphere compared to the casual quick play where people would mostly just goof off.  Because of this I got placed in low gold which was below the average player.  This was because the game would compare my match statistics to other players that were in my MMR the hidden skill rating the game gives you, usually when you do your first ten ranked matches the game uses an algorithm to detect which rank you should be placed in and since it has no idea in the placement games it places you in your MMR.  So I should have been playing against people my own MMR in my placement matches but rather I ended up playing with the top 5% of players.  Because of this my statistics for the game were significantly worse than the other in my game and other players that have my MMR going against equal opponents.

When I first got placed in low gold I was a little bummed because I did want to do good.  So I decided to make myself improve as much as I could, I would record matches and watch them over and watch some of the best players in the world and analyze what they did that was good and what they did that was bad.  But, when I was doing all this I enjoyed it, I was having fun so it didn’t seem like work.  Then after doing all these things to improve I would slowly climb in rank going from Gold to Platinum then to Diamond and then Masters.  All that happened over around a year, over a year I had climbed up and improved to where I had originally been destroyed in my first 10 matches ever.

Cut to present day and I’m much better at the game but it turned out to be a curse in disguise more than anything, people in higher skill ranks people are more rude or commonly known as toxic, and the games variety gets boiled down to everyone playing the same thing because it is more powerful than everything else and gives you a winning advantage.  If I had stayed in lower ranks it might had lead me to stay in a more casual experience.  Also the game sadly has deteriorated over time heroes have been added in that don’t seem balanced in one way or another.  Some heroes are too weak, some are too powerful, some are only viable at a certain skill rank and the list goes on.  I think one of the reasons why the game ends up with such poor hero design is not because the team working on it for the game isn’t talented it is because they are rushed they make and release a new hero every 4 months. Along making new heroes the team also has to work on the things already in the game like fixing bugs, changing already existing heroes whether it is changing a cool down for a hero’s attack or entirely changing everything about the hero other than the model.  Though I used to love the game I don’t think I will be playing it much in the future sadly. 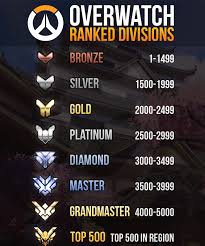 (All Overwatch Competitive Ranks, the numbers on the right is the Skill Rating number)