You’ve probably seen many conspiracy theories about Donald Trump and his family. One of the most popular conspiracy theories claims that Melania has a body double. I mean, considering that the president is obsessed with TV ratings, feuding with the NFL, and constantly commenting mostly grammarly incorrect and confusing tweets, the idea of Melania having a body double is far from being far-fetched. The conspiracy theory first started when Joe Vargas tweeted that the “Melania Trump” who appeared at the press event at a US Secret Service training facility was an imposter lookalike. 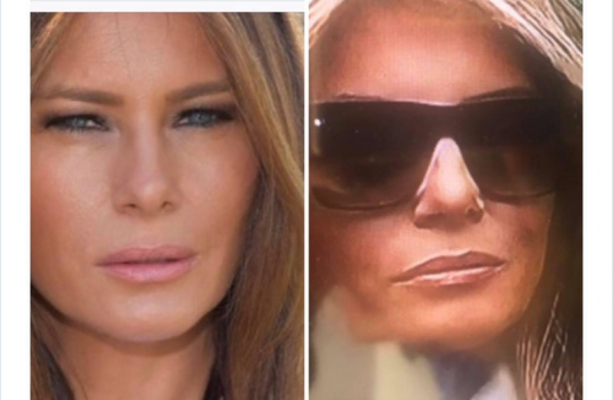 Joe Vargas’ tweet immediately made sense to a lot of conspiracy theorists -mainly the flat earthers- and people with a deep distrust in the government. Vargas’ tweet was apparently retweeted 60,000 times. Many of the people who retweeted his tweet said they ” wouldn’t be surprised if Melania actually had a double”. The whole ordeal of a fake Melania gave us all a rare moment where silliness collided with strange reality, resulting in an entertaining internet adventure. The whole fake Melania conspiracy theory relies a lot on the fact that Melania doesn’t actually seem to happy with her marriage. Having a body double would allow Melania to abdicate her duties and go somewhere or do something else. Earlier in 2017, Huffpost reported, “Melania hates holding her husband’s hand.” The Independent also interviewed etiquette experts on whether Donald Trump’s walking distance from Melania was “disrespectful”. Overall, the Melania conspiracy naturally portrays her as: either unwilling to be part of the administration or as someone who hates her husband so much that she’s found a body double to stand in as the first lady so that she can do whatever she would rather be doing.

Overall, I think this whole conspiracy theory is what happens when someone has free time that they don’t know what to do with. The theory is extremely open and can easily be disproven (on so many levels). I mean, Melania might have just been having a bad day, a change in makeup, or the lighting on that day might have made her look that way. This is all just a product of different peoples opinions on Trump being president, Melania being first lady, and a lot of nonsense. None of it has been proven by factual, reliable information. Personally, I don’t believe any of this, cause I mean seriously, would you?

What Happened to the Malaysia Airlines Flight 370?