Did The US Know About Pearl Harbor Before It Happened???

Mid WWII, December 7, 1941, the island of Hawaii was bombed by Japanese planes, causing the US to declare war on Japan and join WWII. Many sources claim that the bombing was a ‘surprise’ to all of the United States, yet many historians claim that FDR, the president at the time, knew that the Japanese would attack the US. Before Pearl Harbor, Japan was mainly focused on their interactions with China. The Japanese were occupied with defeating the Chinese resistance to Japanese control to be able to establish control and a ‘secure colonial foothold’ on the Asian continent. Japan needed reliable sources of materials such as metals, minerals, oil, and rubber to maintain military production. The catch here, or the reason why historians might think the US knew the Japanese would attack, is that the US has stopped selling Japan these materials as a part of the attempt to get Japan to back away from China, which did work, because Japan lost access to 3/4 of its overseas trade and 88% of its imported oil. One source says that the US stopped sending materials in retaliation for the Japanese occupation of French Indochina. The US, at the time, wanted to stop Japan’s Global Expansion, making war inevitable from Japan’s point of view, in order to defend its place as a major world power. In May 1940, the main base for the US’s Pacific fleet was at Pearl Harbor, which was, conveniently for Japan, relatively undefended. 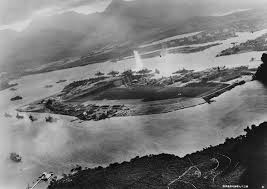 It is weird though isn’t it? Like why would the US, out of all countries, leave the place where their whole Pacific fleet was undefended. I mean that’s just ridiculous, especially since right before Pearl Harbor happened, Joseph C. Grew, the US ambassador to Japan, wired Washington telling them he learned Japan was going to launch a surprise attack on Pearl Harbor. For some reason, no one believed him. FDR was even actively provoking Japan prior to the week that Pearl Harbor happened. Wikipedia claims that FDR was “imminently expecting and seeking war”. Rear Admiral Frank Edmund Beatty Jr., who was an aide to the Secretary of the Navy Frank Knox and was very close to President Franklin D. Roosevelt’s inner circle mentioned that:

Prior to December 7, it was evident even to me… that we were pushing Japan into a corner. I believed that it was the desire of President Roosevelt, and Prime Minister Churchill that we get into the war, as they felt the Allies could not win without us and all our efforts to cause the Germans to declare war on us failed; the conditions we imposed upon Japan—to get out of China, for example—were so severe that we knew that nation could not accept them. We were forcing her so severely that we could have known that she would react toward the United States. All her preparations in a military way — and we knew their over-all import — pointed that way.

The blow was heavier than he had hoped it would necessarily be. … But the risks paid off; even the loss was worth the price. …

Clearly FDR must have known that Pearl Harbor was going to get bombed. All of the evidence that I have found clearly points in the direction that he knew. I just don’t understand why he didn’t try to prevent any of the casualties and deaths. FDR could have at least tried to evacuate Pearl Harbor without letting the Japanese know, yet for some reason he didn’t. Well I think I’m done here. Why do you guys think history claims that Pearl Harbor was a surprise attack?