I watched this movie over Thanksgiving break and it left me thinking for days. This sci-fi  movie “Jonathan” is about someone who has single body multi consciousness. There are two brothers living inside of one man, portrayed by Ansel Elgort. One of the brother’s name is Jonathan who is awake from 7am to 7pm, and the other brother, Jon, is awake from 7pm to 7am. They communicate by making videos for the other to watch when they are awake. The movie documents Jonathan’s life and shows the struggles he faced each day but also highlights the love he has for Jon. The brothers have a certain set of rules that they have to follow in order to stay functioning, such as a certain sleep schedule and no girlfriends. However, Jon ends up dating this girl named Elena who brings many complications to the brothers’ routine. The brothers begin to fight and both of their lives start to go downhill throughout the movie.

This movie was very interesting but it was slow at times. I wish it had a little bit of a faster pace and a more exciting ending. The ending was pretty dry in my opinion, but it did leave me thinking about the science behind it and the other things that could’ve happened.

Bohemian Rhapsody is the new movie that shows the epic story of the band Queen and their lead singer Freddie Mercury. It begins with showing how Freddie meets the rest of the band members and then follows their career taking off. The movie highlights the hardships that Queen faced, how the four men became a family, and the details of Freddie Mercury’s life and sexuality. Also, Queen has amazing music that is played and performed throughout the movie that makes you just want to get up and sing along. This was a very powerful movie and I would HIGHLY recommend going to see it in theaters! This exciting movie came out at the beginning of October and has been a common source of conversation for over a month now.  This movie shows a very moving story about a famous male singer (portrayed by Bradley Cooper) who meets a woman in a bar (portrayed by Lady Gaga) with an amazing singing voice.  He takes her out and brings her on stage at one of his gigs, where she is discovered and her career takes off. The two fall in love, and the movie follows their life story and shows the ups and downs of relationships and careers.

This is a very well filmed movie with an excellent soundtrack, but it does have a very upsetting ending. I loved the movie up until the last 20 minutes, and the ending left me thinking about the movie for days. This movie was extremely powerful and well written and I would recommend going to see it in theaters while you still can! 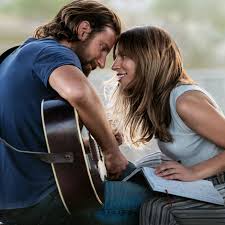