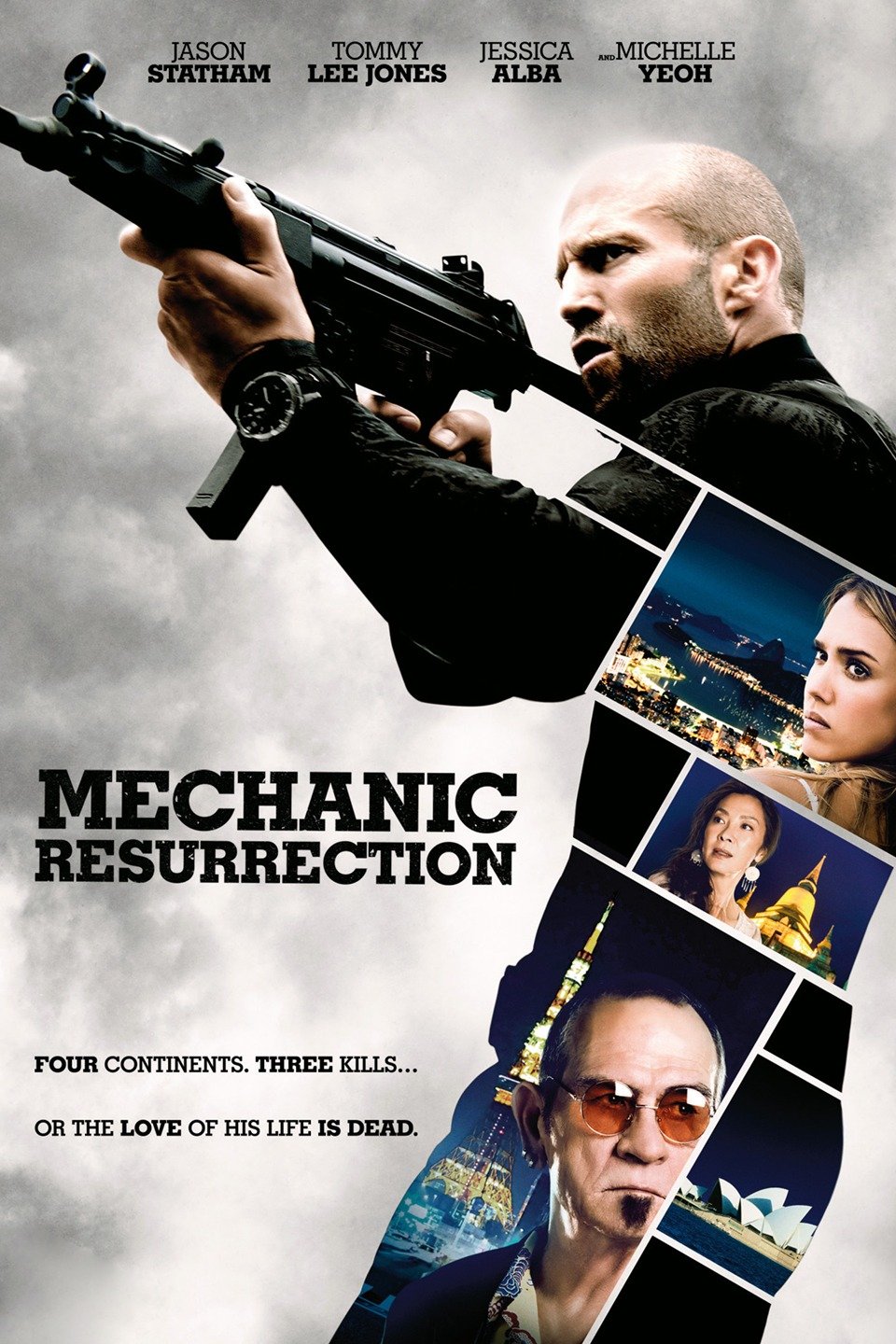 Today I’ll be reviewing yet another Jason Statham movie, this time it is Mechanic: Resurrection. This is seemingly a sequel to the original Mechanic movie, but I had no clue this movie or its predecessor existed until I happened to stumble across this movie on TV. The movie is about a hitman named Bishop (Jason Statham), who has to assassinate a series of people or else his “employers” will kill his wife, or something like that. Let me just say that this movie makes no sense and is terrible.

Regardless, it is entertaining if you don’t take it too seriously. The action is fairly entertaining, only because Statham is fun to watch and the action scenes are surprisingly competent. The ways Statham goes about killing his targets is great because of how unorthodox and ridiculous they are. For one kill, Statham gets himself put into a maximum security prison on an island in shark infested waters to kill one of his targets by strangling him. He then sets the body up to make it look like the man is praying when his henchmen come to check on him. Statham sets explosive gum he previously bought on a wall and breaks out, rubbing shark repellant on himself and swimming away.

For another kill, he drills a hole into the bottom of his target’s pool, which hangs out from his penthouse to the streets below. The pool shatters and the man is then sent plummeting to his death. There are many other things that just generally don’t make sense in regards to the plot, and the various characters’ motivations. In the end Statham has to escape a yacht before it self destructs, just to show how over the top the movie can be. I give it a 5/10. The Meg is a 2018 film that stars Jason Statham and the Chinese actress Li Bingbing. It was directed by Jon Turteltaub. The Meg is one of those movies where you just need to turn your brain off and watch it. It is a surface level summer blockbuster and nothing more, fun to watch but has no actual depth. One thing I can praise is that it has very good special effects.

The plot of the movie revolves around an oceanic research team that explores the Mariana trench. Upon reaching the bottom they find a layer of hydrogen sulfide, beneath that they discover an environment flourishing within, as well as a living Megalodon. The crew that travels down is accidently releases the Megalodon into the oceans, which begins to wreak havoc. Jason Statham and the other main characters are then forced to track it down and kill it.

The Meg is, as I said, fun to watch and features very good special effects. I personally saw it in 3D with a few friends. Although I normally dislike 3D, it did lead to some memorable moments. During one scene, the Meg eats a man who was in an inflatable ball, causing part of it to fly at the screen, which scared my friend. The acting is fine, it’s not terrible and nothing special, just good. Although normally I would despise a movie more for being mediocre than straight up horrendous. In the case of movies like this, “creature features”, I don’t expect anything great and enjoy them because of it.

Overall, the movie is decent but very enjoyable. I would give it a 7/10.

Welcome to HIgh IQ Movie Reviews. I will be reviewing movies with very insightful criticism and evoke great amounts of thought. I hope that you will enjoy my content and read.