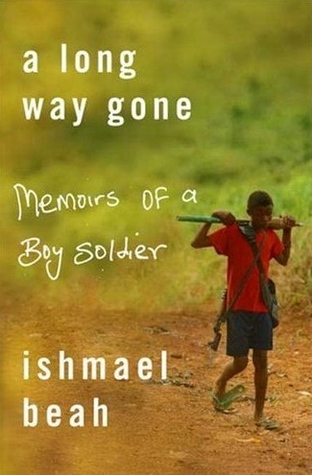 This is the memoir of Ishmael Beah who at the age of twelve fled his village in Sierra Leone.  Rebels had attacked.  He never saw his parents again.

After weeks of walking and scrounging for food, he was picked up by the government army and became a soldier.  He was given an Ak-47, taught to fight, often given drugs, and sent into battle.  A boy that once loved to perform rap songs for others was now addicted to drugs and killing people.   After years of fighting in his country’s war, he and other soldiers were rescued by UNICEF.

How do you rehabilitate child soldiers?  It takes alot for Ishmael to come out of his shell but eventually through the help of a nurse and music he does.  He then asked to United Nations in New York and speak about his time as a child soldier.  It is there that he meets his foster mom.

This book is a heart wrenching read, but there is also humor and joy.  I highly recommend this book.