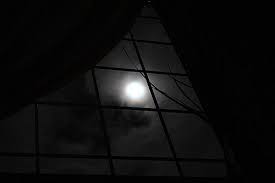 I had never been more sad that the school day had ended. As the chatter of my classmates filled the hallways of my school, I walked back to my house with a heart full of dread and feet made of lead. For some reason, echoes in my head had been telling me all day what waited for me at home. My dad was coming back from the dead.

I walked into my dark house, filled to the brim with overgrown houseplants and strangely colored lights that reflected off the large bay windows. My mom was waiting for me at the bottom of the stairs, dark violet smoke pouring out of an alcove in the wall. Glowing glass vials filled that alcove, which is where the ghosts of my dad were kept. Peering into the kitchen, it resembled my old kitchen from when I lived in Bahrain–younger versions of my sister and brother were sitting at the kitchen table. This house was a strange medley of old memories and random details I’d never seen before.

Mama led me up the stairs and into a room with dozens of paintings strewn around–some on the wall, some on the floor, some covered with sheets, and others propped up on easels. All of them had my dad painted on them, but all were different. One of the paintings had a version of my dad with just one large eye on his face, and two grotesque eyes on his stomach. Yet another art piece had Baba with long, thin, jagged teeth protruding from his bloody mouth. The others I can’t remember. There were 4, specifically, but I guess the other two ghosts were lost in the depths of my subconsciousness.

I don’t recall how or when, but I eventually went to sleep in a little cabin outside my house. When I woke up (within my dream), all looked normal but my emotions went off. Fear is a warning sign in my dreams; even if I’m in a serene situation, fear indicates that my dream is about to change.

I was then inside my house, looking for my sister. She wasn’t in her room, and my brother wasn’t in his. My mother was also gone. Their bedrooms were dark, and the silence of the house contributed to my fear.

In my dreams, there are underlying scripts or themes within my mind that tell me what’s going on, even if it isn’t clear in the scenery and visuals. I just knew that my family had left me behind on purpose, and had left me behind for the ghosts to find. As I tried to run upstairs to the room full of paintings, I turned around and the ghost of my dad with eyes on its stomach was there, slowly trailing me. I kept running through the endless house, up and down stairs to evade the ghosts that kept appearing from nowhere–all slightly different in a grotesque way. And the dream didn’t end.

I kept running until I was jolted awake by my alarm, and I had to shake off my fear and go to zero-period gym and play pickleball.