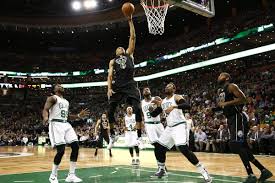 On Wednesday the Bucks defeated the Celtics 116 – 96 which put the series to 4 – 1 and cause the Bucks to advance to the Eastern conference finals. This is their first time making the conference finals since 2000. This series wasn’t even close the Celtics won the first game by a lot but after that have gotten blown out. Their star players were not performing well because of the great defense and offensive power of the Bucks personally I think that the Bucks will be going to the finals. They are great at home and almost always put up a tough fight at away games with the All star play from Chris Middleton and from Eric Bledsoe and the MVP level play from Giannis they have a very well rounded with great depth in their bench and starting line up. I am very excited to see what else these playoffs have to bring I am hoping to see a Bucks vs Rockets finals but only time will tell. Thanks for reading and who do you think is going to make it to the finals.

Last night the 3 seeded Trail Blazers defeated the 2 seeded Nuggets. This game was very rough from both teams with one player from each team being injured. Early in the second quarter Torrey Craig was going for the ball and was accidentally hit in the face resulting in a broken nose which was bleeding a lot. The game continued and the Blazers were ahead for most of the game by at least ten points. With the Nuggets down in the 4th Craig came back into the game and hit a 3 which was the first 3 made by the Nuggets since the 1st. Although the Nuggets were down by double digits they were motivated from their teammate and they went on a run cutting the lead down to 5. However the Blazers were not ready to lose holding them from  cutting the lead down anymore and Rodney Hood hit two clutch free throws to clinch the win for the Blazers with a final score of 97-90. Thanks for reading and let me know who you think is going to win this series.