Hello and welcome back I will be talking about the three main players that I think will win the MVP so lets get straight into it.

James Harden has proved to everyone that he is a NBA super star and has proven that he is good enough to win MVP and he is putting up MVP stats for another season. James Harden is leading the league in points and steals he is also third in assists with all that he does for his team he is definitely a contender for the MVP race. I personally think that he could go back to back if he keeps up with what he is doing so far this season.

Giannis Antetokounmpo has also been on a tear being almost unguardable he is so fast strong and large that he is able to get past almost everybody with ease. Giannis is able to score a lot of points with few shots put up he has a high shot percentage of 57.7%  and is a fierce defender  if Giannis keeps up what he is doing he has a serious chance of winning this years MVP. 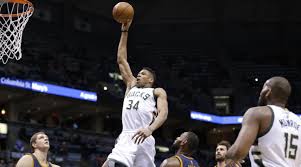 Last but most certainly not least Kevin Durant a former MVP has been playing MVP worth so far this season. He is the second in the league in scoring and has been carrying the Warriors recently with Curry being out he is able to score from anywhere get assists and he has solid defense. 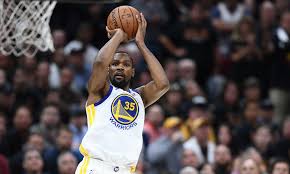 All of these players have been incredible and will have to prove who is the best i feel like this will be a very close race my personal choice would be Giannis but that is just what I think let me know what you think and thanks for reading.

The recent news in the NBA has been all about Draymond Green and his suspension. In the Warriors Clippers game with a few seconds left Draymond Green was running down the court with seconds left he fell and the game went to overtime. Kevin Durant was mad and was yelling at him so the two started fighting and their teammates had to calm them down. Draymond cused at KD multiple times and when they went into overtime they ended up losing so the two players went to the locker room mad. They fought words were exchanged and Draymond said some horrible things that got him suspended. I think that the Warriors did the right thing for suspending him because he is a grown man and he needs to watch what he says and does. However neither of them were in the right because Draymond was trying to make a play and was already ahead of KD with seconds left if he had passed it to KD he would have had to chuck a half court shot. 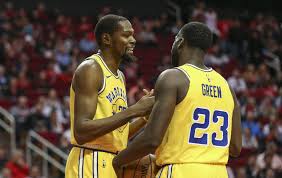 What do you think about this let me know and thanks for reading.