You wonder how a tree could get so big.  Giant Sequoias are the biggest trees on earth.  The biggest tree on earth is a Giant Sequoia and it’s name is General Sherman and it is 2000 years old.  Giant Sequoias can grow to be over 3200 years old though.  They are found in the Sierra Nevada mountains in California.  They require certain living conditions with a strict temperature range under 85 degrees, elevation of 5,000 to 7,000 feet in elevation, and a relatively moderate climate.  The largest Giant Sequoia ever has a volume of 52,508 cubic feet.  Giant Sequoias can have arms that exceed over 8 feet in diameter, and their bark can be up to 3 feet thick.  They are a very sturdy tree and are fireproof, rot proof, insect proof and are a very sturdy hardy tree.  One Giant Sequoia, the president, has over 2 billion leaves, is 3220 years old, and is the 3rd largest tree volume wise.  The Giant Sequoias wood however is relatively brittle and not very good for building things.  The Sequoia’s reproduce by cones with seeds inside them that are opened up by a forest fire.

Guy standing next to a Giant Sequoia 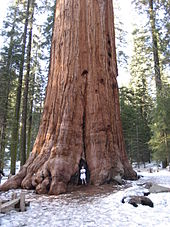